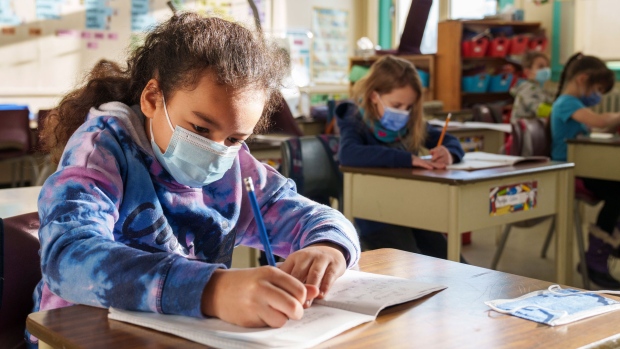 Ontario’s Chief Medical Officer of Health has rejected a request from local public health officials to resume mandatory mask-wearing in schools, pharmacies or other workplaces, saying it is not necessary to the moment.

“The return of masking could help protect people suffering from inequalities and vulnerabilities, relieve pressures on our hospitals and, above all, protect the health of the people we serve”, doctors Thomas Piggott (Peterborough), Mustafa Hirji (Niagara) and Shanker Nesathurai (Windsor-Essex) wrote.

In his response dated May 6 and released Thursday by the Department of Health after an investigation by CP24, Moore says their request is unnecessary.

“As I have done throughout the pandemic, I will continue to monitor the data and the COVID-19 situation across the province to assess the need for any changes to the class order (masking) or d other public health measures at the provincial level. Moore wrote.

Public Health Ontario said last month that the decision to end mandatory masking in these settings on March 21 was “temporarily associated” with the start of the sixth wave in Ontario.

The end of masking led to a significant increase in virus transmission in public schools across the province, with staff and student absences increasing by about 40% between late March and early April.

Several school boards have attempted to adopt individual mask mandates on their own, but only one in Ottawa has been successful.

Others, like the Toronto District School Board, have had to revert to almost daily notifications to parents about new cases in schools.

In her letter, Moore reiterated her strong recommendation that everyone continue to mask up as much as possible in indoor public places.

“While the class order for masking only applies to specific settings, I continue to strongly recommend that people wear a properly fitted mask in all indoor public places, especially when physical distancing is not is not possible.”

Masks are still mandatory in all Ontario hospitals, long-term care homes, retirement homes and transit vehicles until at least June 11.

Between the announcement of the end of mandatory mask wearing in schools and stores in early March and the end of April, the Washington State Institute for Health Metrics and Evaluation (IHME) estimated that mask use in Ontario went from 71% to 42%.

Also on Thursday, Moore told The Canadian Press that the province is going to have a “calm summer” with COVID-19, but he is still concerned about new Omicron subvariants circulating elsewhere in the world.