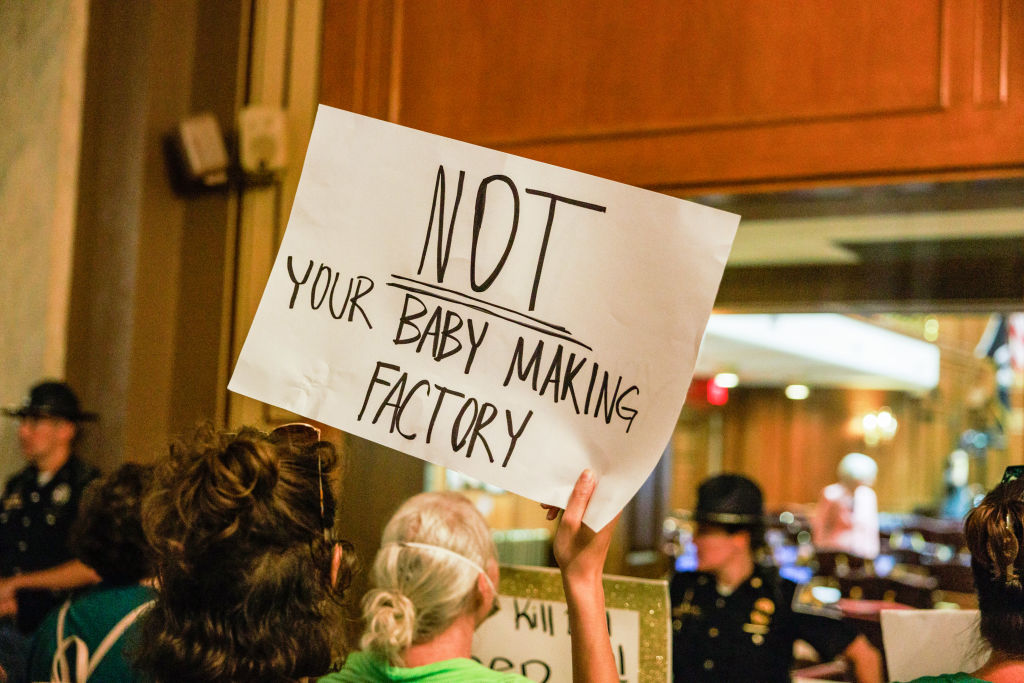 The first lawsuit, filed Aug. 30, sought to enjoin the enforcement of SB 1. The ACLU represents Planned Parenthood, Women’s Med Group Professional Corporation, Whole Women’s Health Alliance, Dr. Amy Caldwell, and All-Options, Inc., against the members. the Medical Licensing Board of Indiana and some county attorneys, who are supposed to enforce the law if it goes into effect.

On September 8, the ACLU filed an additional lawsuit, this time on behalf of Hoosier Jews for Choice and five women. The class action lawsuit argued that SB 1 violates the state’s Religious Freedom Restoration Act because not all religions believe that life occurs at the time of conception.

Indiana’s Republican-dominated Legislature passed SB 1 in a special August session convened by Gov. Eric Holcomb, who signed the law the night it passed Aug. 5. The new law states that “human physical life begins when a human egg is fertilized by a human sperm. Indiana is the first state to ban abortion following the U.S. Supreme Court ruling in Dobbs v. Jackson Women’s Health Organization. This case led to the disappearance of the protections against abortion, established almost 50 years ago in Roe vs. Wade.

Alexis McGill Johnson, president and CEO of the Planned Parenthood Federation of America, called the abortion ban “both dangerous and incredibly cruel”. “We demand more for patients and providers, and we will continue to fight for everyone’s right to make their own decisions about their body, their life and their future,” she added.

The Aug. 30 lawsuit claims SB 1 will “virtually eliminate access to abortion statewide.” The ban provides only three limited exceptions: cases of rape or incest before 10 weeks after fertilization; pregnancies threatening the life or physical (but not mental) health of the pregnant person; and cases involving deadly fetal abnormalities.

Additionally, it is closing licensed abortion clinics, where most abortions take place in the state. Instead, it requires that abortion care occur in a hospital or majority hospital-owned outpatient surgery center (“ASC”), regardless of gestational age. SB 1 will unnecessarily increase spending on abortion care tenfold in many cases, the lawsuit says, even though abortions in outpatient clinics are as safe as abortions in hospitals and CHWs.

“Abortion bans are designed to dehumanize people by undermining their dignity, disregarding their health and well-being, and telling them that the future they create for themselves and their families is less important than a politician’s agenda,” said Rupali Sharma, senior attorney and director of the Lawyering Project.

The original lawsuit listed numerous anticipated negative consequences of the ban. For example, Indiana’s infant and maternal mortality rates are already among the worst in our country.

“In 2020, 522 babies in Indiana died before their first birthday… about 10 babies every week. In 2019, 60 pregnancy-related deaths occurred, and Indiana’s Maternal Mortality Review Board determined that 80% of those deaths were preventable.

The infant mortality rate for non-Hispanic black infants in Indiana is more than double the infant mortality rate for non-Hispanic white infants. In contrast, legal abortion is one of the safest medical procedures and complications are rare. “The risk of death associated with childbirth is more than 12 times greater than that associated with abortion,” according to the August lawsuit. Indiana infant and maternal deaths are expected to increase if abortion care is banned.

Additionally, the plaintiffs argued that Indiana’s abortion ban would disproportionately affect people of color and those with low incomes. “Nearly 75% of those seeking abortion nationwide have poverty-level incomes.”

Indiana also strictly limits assistance to low-income families with children. While the federal government allows states to provide Supplemental Nutrition Assistance Program (SNAP) benefits to people up to 200% of the federal poverty level, Indiana limits eligibility to 130% with less than 5,000 $ of assets.

Indiana also has a “family cap policy” prohibiting anyone with one or more children from receiving additional Temporary Assistance for Needy Families (“TANF”) benefits for additional children. The lawsuit points out that “Indiana imposes this restriction knowing that the poverty rate for single mothers in Indiana is 32.8% compared to the overall state poverty rate of 11.9%.”

“Indiana’s abortion ban…will force Hoosiers to travel out of state for abortion care at high, sometimes lifelong, costs to their physical, psychological, and financial health,” said Sharma. “Those who cannot can be forced to remain pregnant against their will, which is and should remain unacceptable to us as human beings, regardless of the recent Supreme Court ruling. This ban must end.

To highlight the legal flaws in SB 1, the ACLU outlined three constitutional claims.

First, SB 1 denies the privacy rights of pregnant women and trans men or non-binary people seeking abortion care. If today’s Indiana courts refuse to find a privacy interest in bodily autonomy associated with abortion – as the U.S. Supreme Court has said Dobbs the majority also failed to do so under the Federal Constitution — the Hoosiers don’t have much hope on appeal, either in Indiana or beyond. A precedent in earlier Indiana deer discusses “appropriate medical care”, including abortion, and recognizes that there is an interest in privacy. However, in Cheaney v. State (1972), the Indiana Supreme Court determined that Indiana also has a “valid and compelling” interest in “a living being and potential human life” “from the moment of conception”. Therefore, the court upheld a ban on abortion with the sole exception of preserving “the life of the mother”.

Second, the ACLU argued that SB 1 violates Indiana’s equality guarantee. This tact may have a better chance of success, especially when applied to medical clinic businesses. The summary closure of clinics that perform abortions invites economic analysis under what is known as Indiana’s Equal Privileges and Immunities Clause. If Indiana wrongfully denied these medical clinic businesses the right to operate while hospitals and CHWs can still perform abortions, the court may find no rational reason to shut them down and may find SB 1 punitive.

Finally, the ACLU raised a vagueness argument under Section 12 of the “due process clause” of the Indiana Constitution. This claim could succeed, at least for an injunction. Specifically, SB 1 may not be clear to physicians — let alone pregnant women seeking care — exactly what it prohibits and when. The language prohibits abortions using two arguably inconsistent and incongruous timelines in two separate subsections of the law.

“This inconsistent language prevents doctors from providing legal abortion services due to uncertainty over whether SB 1 authorizes their conduct. For example, if a physician treats a pregnant patient at risk of death who is 23 weeks pregnant with LMP [last menstrual period]the conflicting provisions of SB 1 do not specify whether an abortion would be legal in this situation.

This vagueness will certainly have a chilling effect on the provision of medical abortion care in Indiana, because the criminal penalties for doctors are so severe. The law subjects “any person who knowingly or intentionally performs a prohibited abortion”… to criminal penalties, including imprisonment for one to six years and a fine of up to $10,000.

Ken Falk, legal director for the ACLU of Indiana, explained the controversy: “This abortion ban will force Hoosiers to carry pregnancies against their will, with life-altering consequences and serious health risks. … Whether or not Indiana’s elected officials personally agree with abortion access, it’s not up to the government to make those decisions for Hoosiers.

American democracy is at a dangerous inflection point – from the disappearance of abortion rights, the lack of pay equity and parental leave, to soaring maternal mortality and attacks on trans health. . If left unchecked, these crises will lead to wider gaps in political participation and representation. For 50 years, Mrs. forged feminist journalism – reporting, rebellion and telling the truth from the front lines, advocating for the Equal Rights Amendment and focusing on the stories of those most affected. With all that is at stake for equality, we redouble our commitment for the next 50 years. In turn, we need your help, Support Mrs. today with a donation – any amount you care about. For as little as $5 a month, you’ll receive the print magazine as well as our e-newsletters, action alerts and invitations to Mrs. Studio Events and Podcasts. We thank you for your loyalty and ferocity.