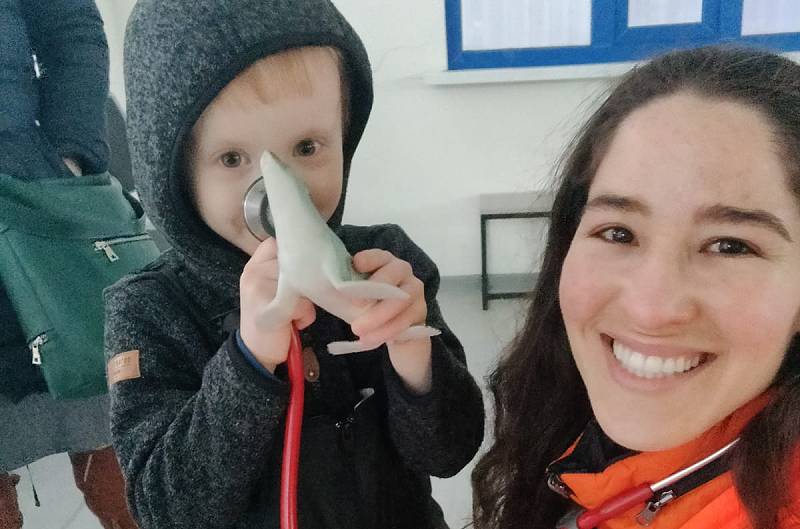 The first night I arrived here (last Thursday), along with 40 other EMS staff, I looked around one of the refugee centers where I was stationed to see who needed help. I found a woman sitting quietly to the side, so I came over to see if she needed anything and asked how she was. With a mix of English, Russian and hand gestures we communicated. I understood that she had been there for three days with her 12 year old daughter who has special needs. I noticed she looked pale and malnourished and when I asked her if she had eaten the food we had for them she said she hadn’t really eaten, only small amounts of very light foods. She keeps kosher, so a lot of the foods she was unwilling to eat because of these restrictions. I told her that the food was kosher, contrary to what she had thought, because we had brought it from Israel especially for the Jewish refugees. She simply refused to eat because she didn’t want to bother anyone or be a burden on the volunteers. She was very adamant about it and verbalized that she wasn’t interested, and she felt fine. It took me a long time before I could finally gain her trust and convince her to eat.

We brought food for her and her daughter and she was so happy. Even doing her job as a mother again, taking care of her child and asking her what she would like to eat, I was finally able to see her happy and content, which in turn made me happy. I’m so glad we were able to put her at ease and show her that it’s okay to accept the help we offer them. That’s what we came here to do and it’s in our interests that the refugees are as happy as possible during this sad time.

The work of the Psychotrauma and Crisis Intervention Unit volunteers on this mission is truly important for many reasons, one of which is to help people like this. The truth is that there are many refugees like this woman. They are proud people and they are uncomfortable asking for help and being given food and other necessities that they have always had and have never had. need to beg. I fully understand where they come from. However, it’s really heartbreaking because we don’t want them to feel that way at all. We’re here to help with anything and we want everyone to feel comfortable accepting help and asking for what they need, even small or seemingly silly requests. For example, one of the refugees has skin sensitivity and asked for a different shampoo because of it and I was happy to get him exactly that.

We are here to help and have brought supplies to distribute. And it doesn’t come from a place of charity and mercy and feeling bad for refugees, not at all. We feel like one of them, we’re in the same boat. We are all brothers and sisters.

Another story where I had the chance to help some of the refugees happened when 2 people, a mother and her son, were injured due to a bomb that exploded near them inside from Ukraine. The son suffered a spinal cord injury and the mother injured her leg, but luckily they are being taken care of and are recovering well. They were across the Ukrainian border so we went to visit them and let them know we were there for them. We made sure they were treated properly and spoke with them for about 30 minutes to an hour to see how they were feeling and get them whatever they needed. Here too, my medical background and my training in psychotrauma and crisis response were helpful in helping them heal emotionally.

The last story I would like to share is of a woman I treated in our clinic who broke her leg. She told me that she had come alone and that she was heading for Israel to settle there. She’s an older woman and the daughter of Holocaust survivors who also fled their homes to save themselves, and now that history seems to be repeating itself, they were hesitant to run away again. They consulted their rabbi who assured them that they would be fine and did not need to leave their home. But the girl had different plans. It was hard for her to leave her parents and she cried because she missed them. As I tended to her leg injury, I hugged her and gave her the support she desperately needed at that time.

After a few minutes, the woman began to calm down and her excitement about immigrating to Israel took over. She was so amazed by our delegation and the fact that the Jewish people are so willing to help. Many others are also happy to make Aliyah. They are all proud of the Jewish nation and our country and proud to be Jews. It’s so inspiring to witness this, especially after everything they’ve been through.

I feel lucky to be here on the giving side and able to help and give much needed love and support to refugees and to use my medical expertise to care for those crossing the border with wounds. I feel so passionate about this mission because I am doing exactly what I would have wanted people to do for my grandparents who are Holocaust survivors, also from here. I think every one of the volunteers does an amazing job and I am blown away by everything that is being done. Volunteers cook, provide medical care, organize flights, humanitarian aid, equipment and logistics, enough for an army. I only do a small part of it all, helping where and with whom I can. I am so proud to be part of this incredible delegation and this incredible organization.